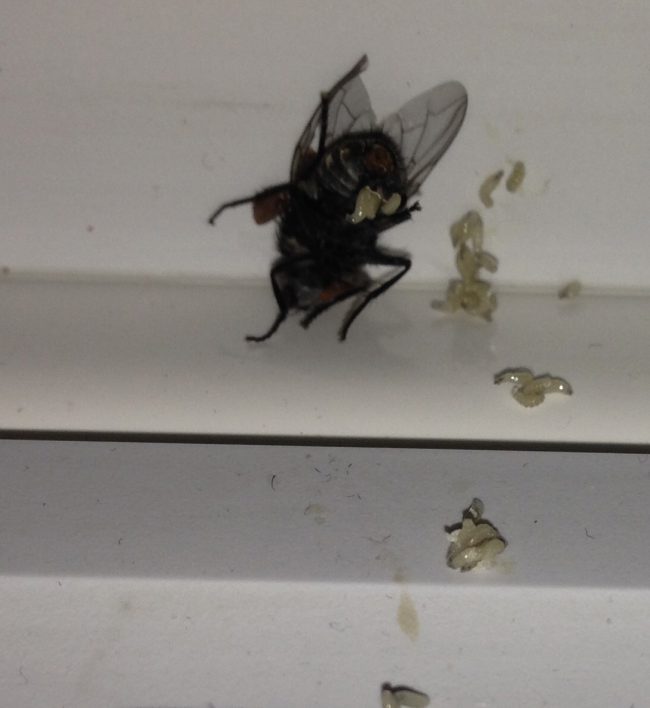 Baise-Moi (Fuck Me). Directed by Virginie Despantes and co-directed by Coralie. Remstar, 20005

“…why not turn criminal and become an agent of Heaven?”6 The Marquis de Sade

Baise-Moi tells a story about two girls; Manu a thuggish looking girl, played by Raffa Anderson and Nadine a part-time prostitute played by Karen Lancaume. Two of them meet at the train station after a couple of “misfortune” events in their lives.

Before meeting Nadine Manu and her only friend, a drug addict, are rapped by three degenerate street punks. After the rape Manu goes to her brother and tells what has happened. Manu’s brother reacts by vowing to find and take revenge upon the rapists, but is killed by Manu instead. Manu takes all his money and leaves.

Meantime in another part of the town Nadine returns home from her job as a prostitute to find her roommate all pissed of because Nadine has smoked all her pot and has drunk all the alcohol in the house. After some argument Nadine attacks her roommate and suffocates her. Later Nadine goes to meat her only friend a drug dealer and her pimp in a hotel. Her friend gives her a package with documents and asks Nadine to bring them to Paris. When Nadine’s friend leaves Nadine hears gun shots and witnesses her friend being killed on the street right before her eyes. Nadine quickly leaves the place and heads towards the train station. She misses the train but meets Manu instead.

Manu and Nadine exchange words with each other. They realize that they share common feelings of anger and together begin go on a violent road trip characterized by the pattern of meeting men, having sex with them, and then killing them.

Finally, after much killing and aimless driving, the two women enter a swingers’ bar and kill many of the couples there. The pair discuss what they have done, and agree that it has all been pointless because nothing has changed inside them even though they have become country’s most wanted.

They keep going on the killing spree, but Manu is suddenly shot in a convenience store after her attempt to rob it. Nadine runs inside the store just to find the dead Manu’s body. Later Nadine decides to burn Manu’s body and to commit suicide. She flees to a remote cabin to do it, but gets arrested by the police right before she wants to finish with her “worthless” life.

The Marquis de Sade enters his Bedroom, puts on a face of one of his libertines and says in a philosophical tone:

“…that it’s only human pride which makes murder into crime? For the murderer just turns the mass of flesh that today appears as a person into tomorrow’s clump of earthworms. Does nature care more about one than the other?”7

I remember traveling with my friend through a desert in California. What amazed me was that there was no greenery around. I remember thinking: “How strange,” but meanwhile I had another thought: “How strangely beautiful, those rocks and sand with some brown grass.” At that exact moment, even though I was adoring the scenery, I understood that I missed the greenery I was accustomed to every day.

Closer to the evening we came to a house in the middle of the desert. Surprisingly it had a tree and a few patches of brown grass around it. The hostess of the house greeted us with warmth and asked us if we would like to sit in the shadow of the lonely tree. We agreed and sat in the shadow waiting till the hostess brought us some lemonade.

While sitting on a bench I looked at the branches of the tree and realized that the leaves of the tree had thorns. It was impossible to touch them. The hostess saw my interest and told me that this tree was planted by her father and that it is dear to her soul. I remember thinking: “Strange, this type of tree in the place I was living would be considered poor and not worth anything, while here it had a great importance, not only because it was planted by somebody’s father, but also because it threw a shadow on patches of grass growing below.”

Suddenly the hostess exclaimed: “How do you like my garden?”

First I was puzzled and started looking for a garden the hostess was asking about, but there was only one tree and the brown grass patches around it. After the hostess saw my puzzled look she pointed to the tree and the grass and told that that was her garden.

Later I learnt that she had been living in the desert her whole life. When I returned home I went to visit my garden. My garden was green and full of life. Roses in the garden had just bloomed. They were giving me the most beautiful colors I could imagine. I bent over to feel their scent when my attention caught some grass growing in the shadow of a rose bush. It wasn’t there before I went to California, so I grabbed it and rooted it out. Then I touched a rose’s blossom, but was stung by a thorn on the rose’s stem.

“How beautiful, yet with thorns,” I thought.

Nadine and Manu’s need for each other is obvious. They were meant for each other as the rose and the weed was in the garden. People see a weed growing next to a rose immediately suggest that the owner of the garden is lazy, but in reality the gardener wants the rose to have company of the weed. Maybe he wants to enjoy the differences between the two of them. The rooting out the weed is making the controversial disappear. The norm of how the garden should look is forced upon the gardener.

That spring I met somebody who made me think about the beauty in desert.

I have always been drawn to deserted places. In the city one would call them seedy, lonely, sad, sometimes, the places where your dreams tell you their own scary fairy tales. There are only a few people who would go there just to be surrounded by all that mystery, the mystery only our unconsciousness can explain. I would go there sit and watch people who would play In the Realm of the Senses8 right in front of me. I don’t know why I was drawn to those places. When I was there it was almost like having a conversation with evil; who would answer my questions god knew no answer to. I believe George Bataille got some answers from those kind of places. I don’t know for sure if we were looking for the same excitement though. Dialogs between Eros and Thanatos were definitely happening there where Bataille got his inspiration (he was frequent visitor to bordellos). Bataille’s main idea is that sex is death. Through the sexual act we give birth to death; thus Eros and Thanatos are the same. Greek/Roman mythology says that they looked similar, with wings and were very handsome men; thus dialog between them is inside of our inner soul.

One of those nights I met a person who came there to unleash his “fairy tales,” or let Eros and Thanatos go and make love to each other freely. He saw me sitting in the corner and watching. First he moved around the room, then he came to me and introduced himself. Suddenly he invited me to his house to read his poetry. I was intrigued. Was that my personal “fairy tale teller” saying to me: “go explore the unknown,” or was it my soul searching for that something Freud calls “the value of dreams?” So I went, even though I knew nothing about the person. I was surprised that I wasn’t thinking about anything bad that could happen in that kind of situation. I was interested in what the meeting would give birth to. Strangely enough, on the way to his place I remembered Pier Paolo Pasolini and his nightly escapades with male prostitutes. Still we don’t know if he was killed by one of them on the eve of All Saints. Most of the times our unconsciousness leads us to places where shadows become reality. Suddenly I imagined being taken by Nadine and Manu from Baise-Moi (Fuck Me) and executed without mercy. Nadine and Manu were so real at that moment that I even started thinking: “is it going to happen the way it happened in the film?” I don’t know how I could understand their pain at that moment, but I understood, or thought that I understood; maybe because at that moment I was without a place, going somewhere I could be raped and left as Pasolini was left:

“Just because it’s a holiday. And in protest I want to die/ of humiliation. I want them to find me dead/ with my penis sticking out, my trousers spotted with white/ sperm, among the millet plants covered with blood-red liquid. / I am convinced that also the last act, to which I alone, the actor, am witness, in a river/ that no one comes to – will, eventually,/ acquire a meaning.”9

Nothing made me be scared of the situation I was physically in at that moment. I was more involved in thinking of why Baise-Moi was born and how it was made. Was it born as a result of Eros and Thanatos having sex? Crazy thought! My mind flew into the realm of shadows, shadows which created “evil” films. German philosopher Leibniz in his Théodicée (‘Theodicy,’ 1710) explained “that in order to perceive light [good], there has to be shadow [evil], that a life containing nothing but sweetness would be cloying.”10

Hm, I wasn’t expecting to talk in this sweet tone after watching Baise-Moi, one of the “evil” movies. Wasn’t I supposed to talk about killing somebody or having sex in unthinkable places?

My mind began writing notes to my undersoul. They were very personal. I could not imagine how I could censor them. They were my nature, my experience, my life. Missing one or another part would just hurt my being. I would not be able to understand what was happening right then without looking at my own soul’s intelligence somebody would like to censor. I would not be able to write the second note to my undersoul if I pretended that what happened didn’t happen. So, before I was in love, I had to be alone. To be alone meant to be with my raw senses. I became like the butterfly which Thanatos was always carrying. I felt like Kierkergaard was yelling to my ear: “There are well known insects which die in the moment of fecundation. So it is with all joy: life’s supreme and richest moment of pleasure is coupled with death.”11

I was fearless as fearless were Manu and Nadine, but “wait!” somebody said, that is not right, exposing yourself on screen is censored. But how can I show that I’m not afraid to be exposed? To be naked meant to show death. The naked body is a picture of death, thus evil, Bataille explained. Nobody likes death. We need to cut it out or censor it. You want to say you want to execute me? But I have not been in love.

8. Suggestion to the film by the same name (In the Realm of Senses. Dir. Nagisha Oshima. Perf. Eiko Matsuda and Tatsuya Fuji. Genius Entertainment and Wellspring, 1979)